as most Tagalog visitors mispronounce the church’s name and start giggling, the stress is in the first syllable, people! it’s BAC-layon… and not BACLA-yon OK? 🙂 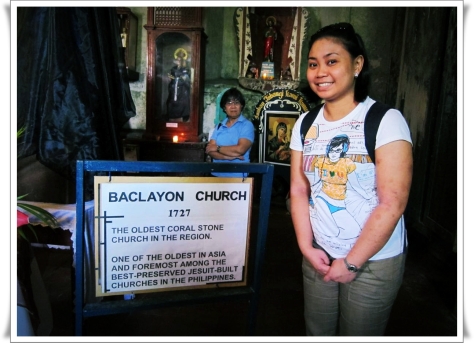 the church is, apparently, one of the oldest in asia (as evidenced by the sign with A beside it and the MIL photobombing. hahaha!). “old” yes. “well-preserved”, not so sure. it was kind of grimy and damp inside. i really wouldn’t know if that’s how it really should be in an old church but i didn’t feel like it was really “well-preserved” at least on the ‘exhibits’ side which were probably done by Grade 2 teachers. (i know, i’m evil) i would think that what i should see first would be something about the church itself but instead, it was more of everything about St. Padre Pio. 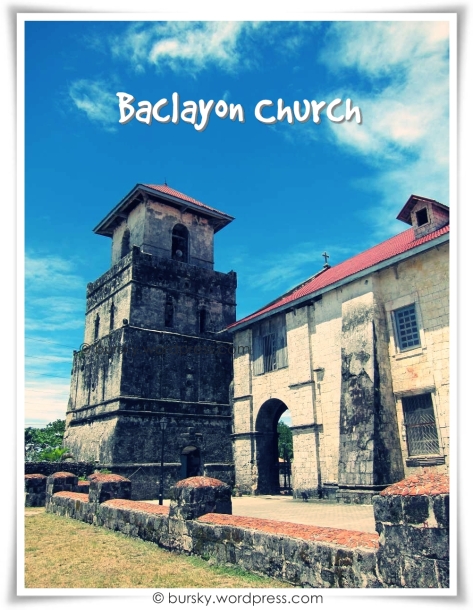 well, it has been one of the reasons why Baclayon Church is visited — the ‘face’ of St. Padre Pio “appears” on the side of the church. i’m not one who readily believes these things are ‘miracles’. i’d rather look into the faithful and what miracles they make out of this ‘miracle’ — if they turn it into something lucrative or genuinely religious. 🙂

anyway, we proceeded inside the church and i saw the beautiful antique retablo and altars. these might be what “well-preserved” were referring to. they did look old and the walls still grimy-looking but they seem to haven’t changed the design from the pre-Vatican II era and i could almost imagine priests saying mass here facing the altars. directly above the retablo were paintings of the Last Supper and other images that looked very recently-done. The kisame looked like it was made from planks of wood and the paintings were done over them… even the ones on the dome!

the chandeliers in the nave of the church really looked old and needed some cleaning. but how do you clean something so high up and so fragile? i would be horrified if i was assigned to clean the chandeliers and just dig myself a hole in the ground should one fall during my cleaning!

it was a bit frustrating to be inside something you can’t seem to understand or know more about, knowing that it is rich in history and stories. i had wanted to visit the museum but my companions weren’t exactly in the mood for museums. i know it’s partly my fault because i didn’t read up on it with all that’s available on the internet nowadays but it would really be nice to learn about it when you were actually there and ask around about the stuff you see. i think that’s what makes a trip and seeing something in person worth it.

anyway, it was really a quick dash to this church and i didn’t even get to snap a picture of the facade!

*sigh* maybe it’s a sign that i should go back and visit it again someday. 🙂