my usual crushes are blonde. there’s Jessica Boehrs since seeing her in Eurotrip. then there was Amy Smart from Just Friends. and latest was the hot spy from Chuck TV series, Yvone Strahovski, Agent Sarah Walker in the show. but after a long, long gaze, i can’t deny it anymore… i’m crushing on a non-blonde this time: Katy Perry!!!

as if totoong magiging kami eh noh? LOL ah basta! i heart her. ♥♥♥

i guess most people are already aware of the North Rail project of the government. sa dami ba naman ng na-displace na tao sa project na ‘to, sino ba’ng di makakapansin diba? at least the government provided relocation sites for the affected residents. but one affected “resident” can’t easily be relocated, particularly in my own hometown. 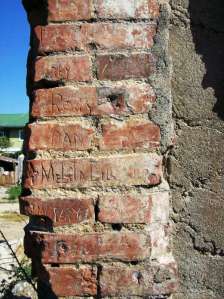 when i was still a little kid, dad would wake me up around 5:30AM to get ready for school. i’d take a bath, get dressed, eat breakfast and wait for my school service to pick me up. and each morning at 5:45 AM, in what is mostly a quiet dawn (save for the early greetings of the neighbor’s chickens), i’d hear the train passing through the adjacent barangay through the noise it made with its wheels on the tracks and perhaps with its engine as well.

now that i look back on it, i think i never saw the train itself. i guess we had conflicting schedules. 😛 but unfortunate as i was, my dad would tell me stories about the train. how he, as a child, used to go with my uncles and playmates to the train tracks, line up coins on them and wait for the train to pass. and once it did, they’d hear all of the coins they placed jingle and fly from tracks as the train flattened them into what looked like blobs of nickel or gold. he also told me that they could never hold them immediately with their hands because they were really hot after being flattened.

when he grew older, he told me how the train became critical to our family’s livelihood. my grandfather was a watchmaker and tailor who worked in Avenida. my father would commute via the train to Manila, bringing some materials to the shop and would come home with my grandfather afterwards. this was quite easy for them since we had one station in our town. and now, with the new North Rail project, this station is deemed unnecessary since they will maintain the one in the City of San Fernando, leaving our station to be demolished.

END_OF_DOCUMENT_TOKEN_TO_BE_REPLACED

This work is licensed under a Creative Commons Attribution-NonCommercial-NoDerivs 3.0 Unported License.